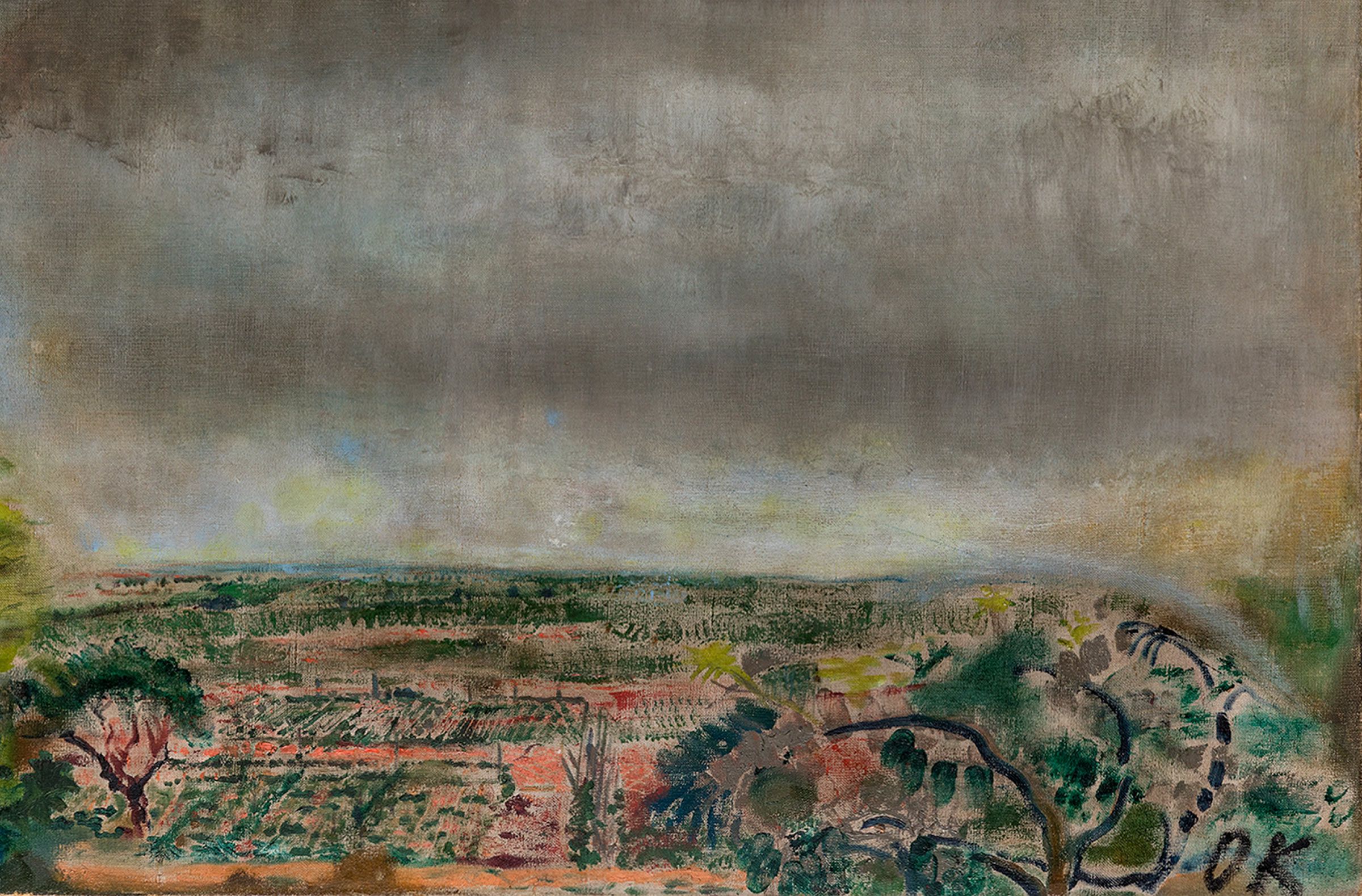 This catalogue raisonné is the first complete inventory of the paintings of Oskar Kokoschka. By publishing it online, the Fondation Oskar Kokoschka is thus making the artist’s work available to all members of the research community and the public at large.

The co-author of the first volume of the catalogue raisonné published in 1995 by Galerie Welz in Salzburg, Katharina Erling has been an expert on the subject for more than 30 years. Walter Feilchenfeldt Jr., the son and successor of Kokoschka’s former representative Walter Feilchenfeldt Sen., has been associated with the artist, his widow and his work for many decades. He has therefore been able to assist the project with some invaluable information contained in the archives of Galerie Cassirer, which he runs.

The online catalogue raisonné of the paintings contains all of Oskar Kokoschka’s 490 works in the medium. It is an updated version of the catalogue dating from 1906 to 1929 edited by Johann Winkler and Katharina Erling that was published in 1995, and complements it with reference to their preparatory work for the years from 1930 to the artist’s death.

The Fondation Oskar Kokoschka holds the rights to the artist’s work and is the publisher of the online catalogue of Oskar Kokoschka’s paintings. The catalogue raisonné aims to report at all times on paintings whose authenticity is beyond doubt. The expertise of the catalogue’s authors is based on long experience in the field of scientific research into the artist’s work and their findings can be consulted and checked online by both specialists and the general public alike. Oskar Kokoschka's work is well documented, and based on current understanding, the inventory is thought to be complete. Nevertheless, the possibility that previously unknown works may emerge cannot be excluded. The authors of the catalogue raisonné will examine such works, and, in the event that they prove authentic, will list them in the catalogue raisonné. The following regulations apply to any request for clarification:

On receipt of an illustration of good quality, the FOK will seek the opinion of the authors of the catalogue raisonné on the authenticity of the work and give an answer.

The clarification is free of charge. No further correspondence will be exchanged regarding the reasons for the decision.

In unclear cases, the FOK may require that the work be presented in its original form. An agreement on the related costs will be arrived at beforehand with the questioner.

If a clarification is requested in the presence of the original, all associated expenses will be borne by the questioner.

Please use the following formulation when citing the online catalogue:

Except where more recent information is available, the titles, dimensions and inscriptions correspond to the information given in volume 1 of the 1995 catalogue raisonné of the paintings by Johann Winkler and Katharina Erling, with the exception of those derived from the preliminary work conducted by Katharina Erling for volume 2.

Cat. rais. no.: The paintings are arranged in chronological order. The new work numbers begin with the year of creation, followed by a numerical suffix in ascending order within that year. The older catalogue raisonné numbers are also listed following Hoffmann 1947, Wingler 1956 and Winkler/Erling 1995.

Dating: Years in square brackets refer to datings deduced from stylistic comparisons with paintings where the date of creation is known for certain. A slash between the years (e.g. 1909/11) indicates a period of creation which runs for two years, while a dash (e.g. 1955-64) indicates a period of creation over several years. The date of completion dictates the year stated. Paintings without a firm date are assigned to a year on the basis of stylistic criteria.

Inscriptions: “Bez.” (inscribed) refers to an inscription on the work by the artist himself, consisting of his monogram and occasionally also his signature. “Datiert” (dated) and “beschriftet” (annotated) indicate the year and annotations in the artist’s own hand. They are reproduced verbatim and in the original spelling along with details of their location. In the case of lengthier annotations, the end of each line is indicated by a slash. In cases of doubt, the comment “von fremder Hand?” (by another hand?) is added in square brackets. “Unbez.” (uninscribed) means that no inscription is present.

Dimensions: Dimensions are given in cm, with height followed by width. The dimensions stated essentially follow the Winkler/Erling catalogue raisonné and hence the dimensions reported by the owners. Dimensions in square brackets refer to paintings that have been destroyed or lost, and are taken from the literature.

Location: Denotes the place where the painting can be found. The comment “Privatbesitz” (privately owned) is usually added at the request of the owner. However, it can also denote private collections for which no further information is available. “Standort unbekannt” (location unknown) means that the painting has been documented after 1945 but its current location is not known. “Verbleib unbekannt” (whereabouts unknown) means the painting has been lost since at least the 1930s. Special circumstances, such as that it has been destroyed or is documented only in a photo, are mentioned instead of the location.

Provenance: Previous owners are listed in ascending chronological order. Each provenance includes the name, location and, in brackets, the date of acquisition, where known. Provenances in square brackets are assumed but not corroborated. Often, a number of art dealers offered the same paintings by Kokoschka and swapped them among themselves. The dealer who sold the picture is listed. Auctions are listed with the organiser, location, date and catalogue reference; detailed catalogue information can be found in the literature. Changes of location of a painting seized during the Third Reich are treated as a provenance, with the individual stages being separated by a comma. Changes of location while under the same ownership are indicated with a slash. Where a public collection in which the picture is currently located has undergone a change of name, the institution’s previous name appears at the end of the provenance.

Exhibitions: Exhibitions are cited in short form for each work, in ascending chronological order. No distinction is made between solo exhibitions and involvement in exhibitions with other artists. The short form states the year and city of the exhibition along with the catalogue reference for the picture concerned. Where there is more than one exhibition in the same year or in the same city, they are further subdivided by organiser. Clicking on the short form opens the page in the list of exhibitions containing full bibliographical information and a display of all the pictures exhibited. With some exhibitions, especially in the period up to 1945, a selection of the most important discussions is included, especially when there was no catalogue.

Literature: The literature is cited in short form for each work, in ascending chronological order. The literature list does not include texts that merely mention the artist, but only those that actually discuss the painted work in detail. The short form names the author(s) and/or editor(s); in the case of collection catalogues the city and for auction catalogues the auction house; and then the year of publication. It is accompanied by the page number and details of the illustration of the work concerned. The page numbers at the beginning refer to the locations in the text where the picture is discussed, followed by details of the illustration. A distinction is made between a full-page “Farbtaf.” (colour plate), a smaller “Farbabb.” (colour illustration), and “Abb.” for black-and-white illustrations. If there is more than one publication by an author in a given year, these are distinguished by a, b, c, etc. in the short form. Clicking on the short form opens the page in the literature list containing full bibliographical information and a display of all the pictures exhibited.

Many of the illustrations are taken from the photographic archive in the artist’s estate compiled by Olda Kokoschka, which is currently held in the Zentralbibliothek Zürich, except where they were created for volume 1 of the 1995 catalogue raisonné published by Galerie Welz, Salzburg. Others are taken from the archive of Walter Feilchenfeldt. The illustrations will be systematically replaced by more recent ones, where available. We would also ask the holders of photo copyrights to notify the FOK, so that the information can be updated where appropriate.