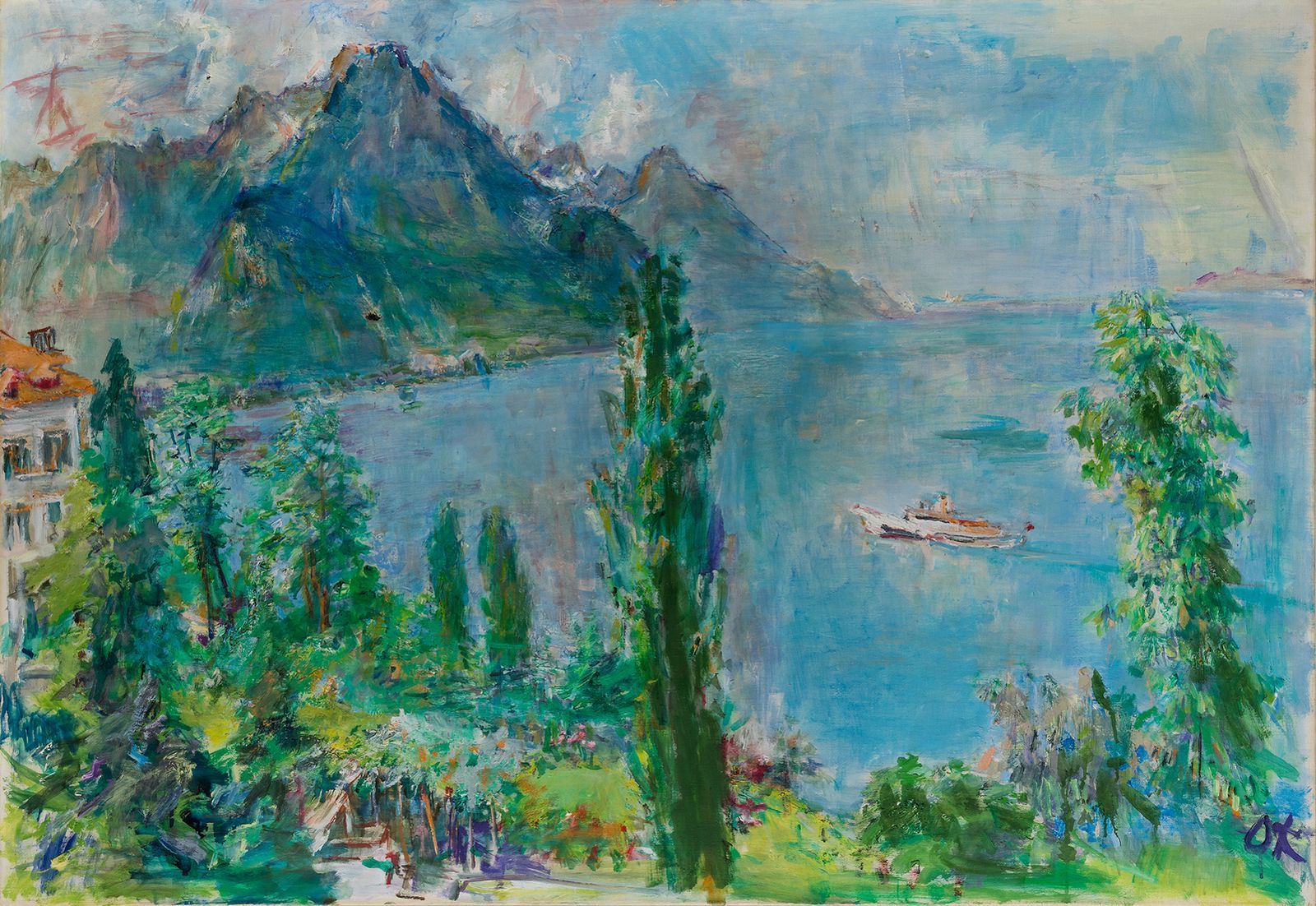 Both the written and the artistic archives of Kokoschka are in Switzerland today. After his exile in London, whither he had fled from the National Socialists, Kokoschka settled in a small villa in Villeneuve, not far from the Château of Chillon on Lake Geneva. Kokoschka stayed there from 1953 until his death in 1980 – the longest time that he was ever resident in one place.


After the end of the Second World War, Kokoschka felt drawn back to the area where his friend and patron Adolf Loos had first enticed him in January 1910 with the prospect of portrait commissions. In Les Avants he painted the famous landscape Dent du Midi. In Yvorne he painted a portrait of the natural scientist, psychiatrist and social reformer Auguste Forel. After this, Loos brought his pupil to the Mont Blanc sanatorium for lung diseases in Leysin, where he painted portraits of aristocrats stricken with tuberculosis. Today, these are considered the epitome of Expressionist portrait painting. Again through the auspices of the Viennese architect, the Zurich Kunsthaus showed twelve portraits in 1913, which made visitors recoil in horror. It was ‘as if figures from E.T.A. Hoffmann were suddenly to surface in the flickering light of the pub’, joked the Züricher Post about Kokoschka’s first exhibition on Swiss soil. Four years later, the multi-talented Austrian also presented himself as a stage author in Zurich. On 14 April 1917 in the Cabaret Voltaire, the world première took place of his comedy Sphinx und Strohmann (‘Sphinx and Man of Straw’). Marcel Janco directed and designed the masks. Tristan Tzara played the parrot, Emmy Hennings the unfaithful Anima, Friedrich Glauser was Death and Hugo Ball the betrayed husband Firdusi. The chaos that raged that evening on the stage of the Cabaret Voltaire was described by Ball in his Die Flucht aus der Zeit (‘The flight from time’; 1927): ‘Finally, when Mr Firdusi had to fall, everything got caught up in the wires and lights strung about. For a few minutes, there was total night and confusion’.

Kokoschka had barely acquired his first major post, as Professor of the Dresden Art Academy, when he was already wishing himself back to the banks of Lake Geneva, as he admitted to friends in a letter of November 1919: ‘If you could discover a true friend of art in Switzerland, in Vevey or somewhere by Lake Geneva – my spiritual homeland – who would loan me Fr. 100,000 and a little house with vines, then I would give him, completely, all my breath and all my love for five years – or, even more clearly, everything that is most beautiful: all I could dream, paint and write’.

In August 1923, there was nothing to keep him in Dresden any more. Together with his girlfriend, the Russian singing student Anna Kallin, he travelled to Zurich by the quickest route in order to prepare his exhibition in the Wolfsberg Art Salon, and from there travelled on to Lucerne. There, from the balcony of the Grand Hotel National, he painted Lake Lucerne and the Bürgenstock. In Blonay he painted two views of Lake Geneva. 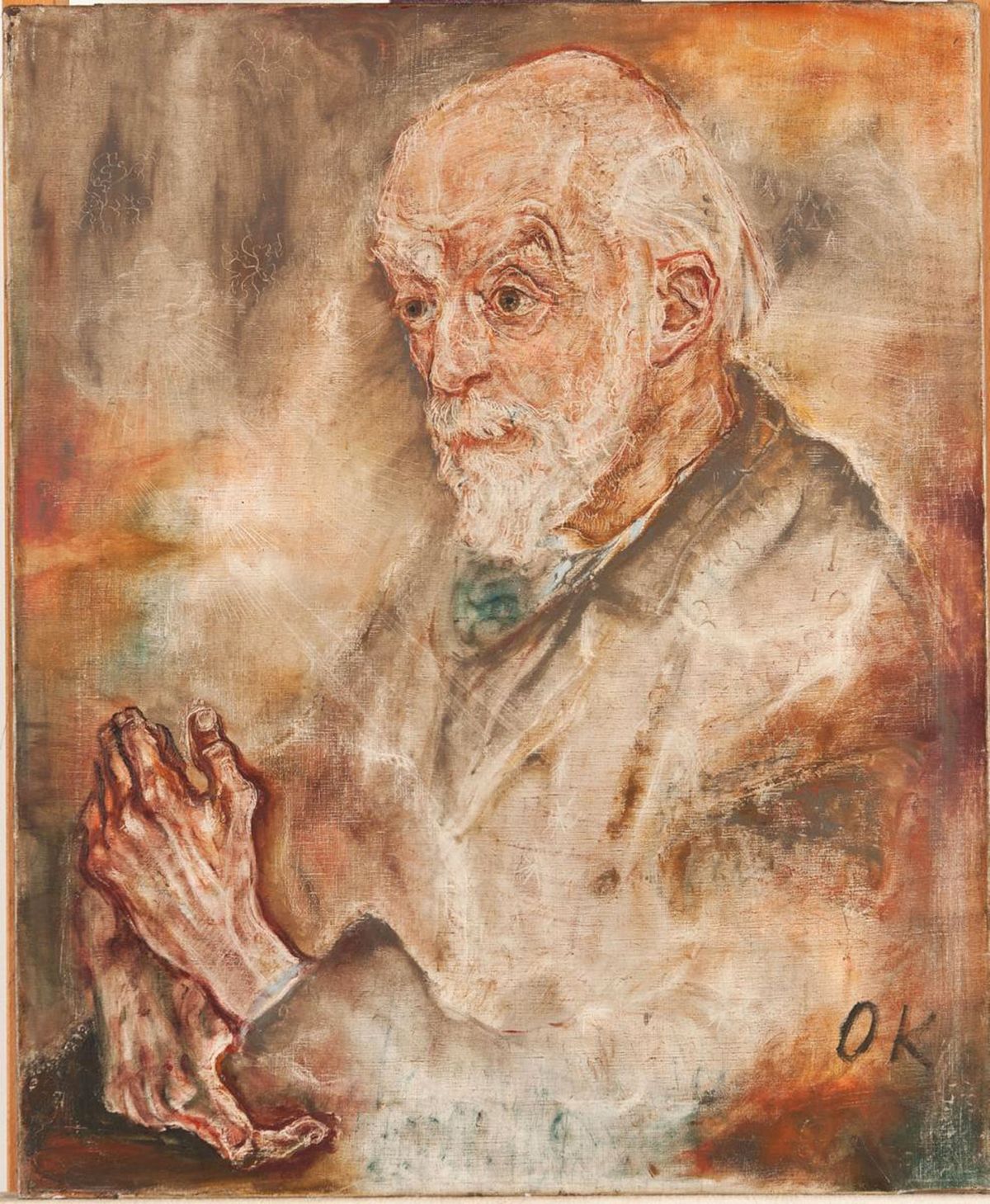 In 1927, the hitherto biggest solo exhibition of Kokoschka’s work took place in the Zurich Kunsthaus and was a reason for the artist to travel back to Switzerland. The fact that only one of the 101 oil paintings in the exhibition was from a Swiss collection – that of Oskar Reinhart – is proof of the great organizational talent of the then Kunsthaus director, Wilhelm Wartmann. Between 1913 and 1947, Wartmann would show works by his favourite artist in a total of ten exhibitions. Wartmann would all too gladly have incorporated the triptych The Battle of Thermopylae (painted in Villeneuve in 1954) into the new Kunsthaus building, but the work was already promised to the University of Hamburg. Even after the end of the ‘Wartmann era’, it was unimaginable that Kokoschka might not figure on the exhibition programme of the Zurich Kunsthaus. On the occasion of his 80th birthday in 1966 and again in commemoration of his hundredth birthday in 1986, the Kunsthaus honoured him with large exhibitions.

After the seizure of power by the National Socialists, important works by the painter made their way to Switzerland. The Swede Nell Walden, the second wife of Kokoschka’s early comrade Herwarth Walden, loaned the so-called ‘Sturm’ collection to the Berne Art Museum in 1936, in which Kokoschka and Chagall were the best-represented artists. By auctioning off 125 works of art confiscated from German museums on 30 June 1939 in the Grand Hotel in Lucerne, including 9 paintings by Kokoschka, the Swiss art dealer Theodor Fischer helped the Nazis to make as much profit as possible from this ‘rubbish’ (thus Goebbels). The director of the Basel Art Museum, Georg Schmidt, travelled to Berlin before the infamous Lucerne auction in order to select several particularly valuable pieces from the confiscated art, and these included Kokoschka’s most famous painting, The bride of the wind. Kokoschka was relieved that his confiscated works had been saved and after the Lucerne auction he declared jubilantly: ‘Gloria and Hosanna I sang after that terrible week’.

The first reason for the artist to return to the Continent after his nine-year exile was the large retrospective of his work in the Basel Kunsthalle in early 1947. This happy re-acquaintance with 65 paintings and almost 200 graphic works made it clear to Kokoschka that more had in fact survived the war unscathed than he had hoped for. After the opening, he wrote euphorically to his sister in Prague: ‘I have in nine days in Basel achieved more, a thousand times more, than in 9 years in London’. In view of the stream of visitors, the director of the Kunsthalle, Lucas Lichtenhan, wrote that Basel had turned into ‘a bastion of O.K.-ism’. Kokoschka remained almost the whole year in Switzerland, organizing his career prospects and contacts with Swiss art patrons. He painted landscapes, portraits and published samples of his literary work in the Neue Zürcher Zeitung. Werner Reinhart, a patron of music from Winterthur, made it possible for Kokoschka to stay for longer periods in Sierre, during which Kokoschka painted a portrait of his host – though to Kokoschka’s great disappointment, Reinhart did not buy it. On the Riffelalp, at the foot of the Matterhorn, the painter finally found an ideal place to set up his easel and he straightaway made two paintings of views of the mountain. When the Basel exhibition moved in the summer of 1947 to the Zurich Kunsthaus, Kokoschka was already able to add two landscapes of the Valais Alps. 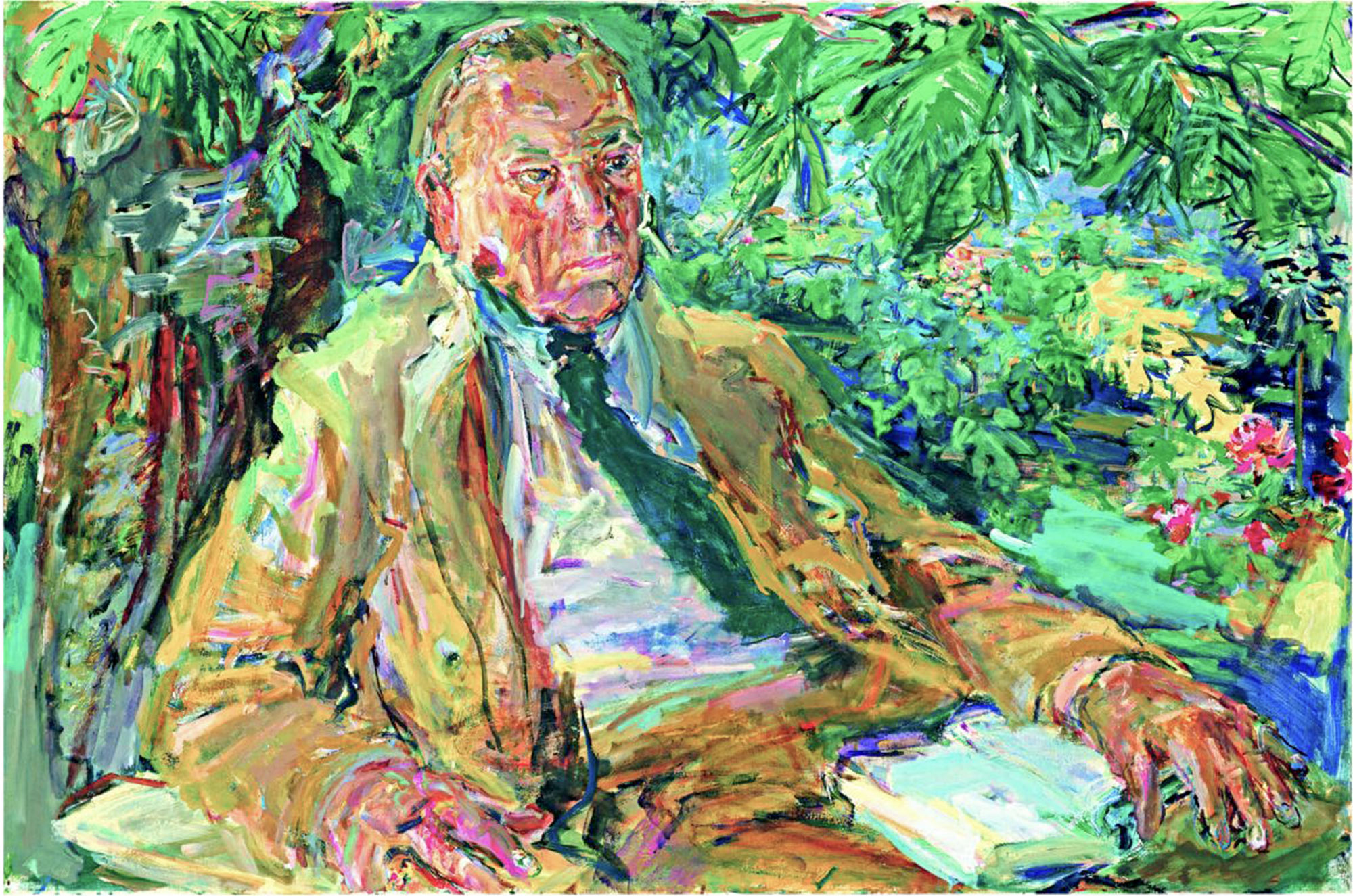 The purchase of a plot in Villeneuve in 1951 was not just a result of a long-held heart’s desire, but also a market-oriented calculation. Switzerland offered Kokoschka the best chances for the future, he had his most faithful patrons here, including Wartmann, the Winterthur lawyer Friedrich Traugott Gubler and his long-time friend, the art dealer Walter Feilchenfeldt. Here there was a firm prospect of portrait commissions and a client base that was able to pay. Kokoschka’s decision to build himself a house on the banks of Lake Geneva was explained in late 1951 in a letter to his sister: ‘This is not a result of pride of ownership, but simply in order to have somewhere central in Europe, in a calm climate and with calm politics, where I can find time to catch my breath’. The artist was by now 65 years old and yearned to be settled at last.

Kokoschka died in 1980 in Montreux at the age of almost 94. His widow ensured that his written and artistic archives found a permanent home in Switzerland. 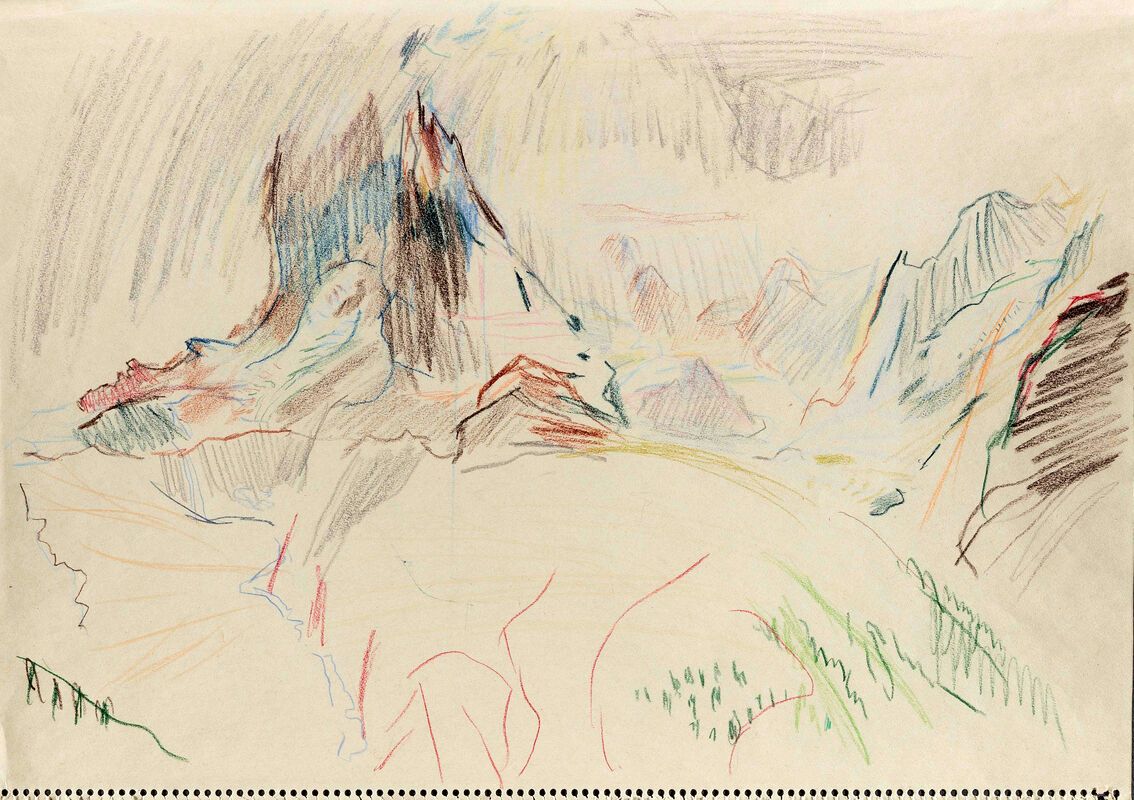 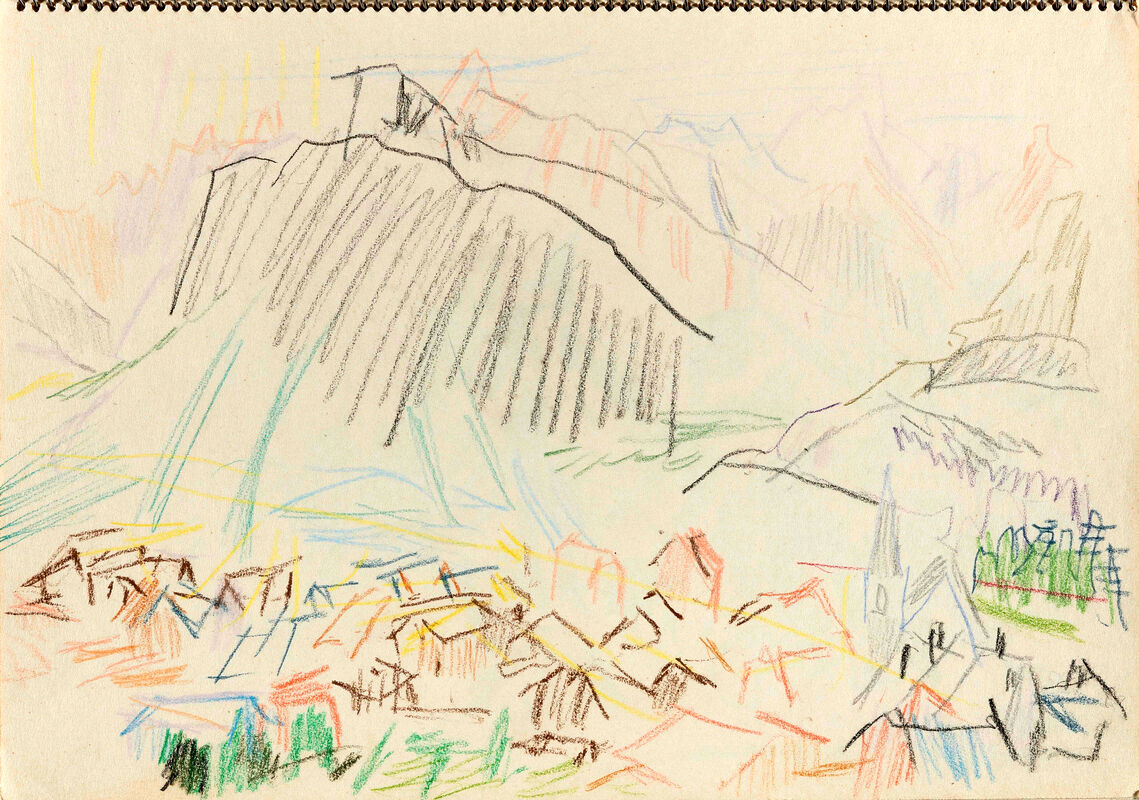 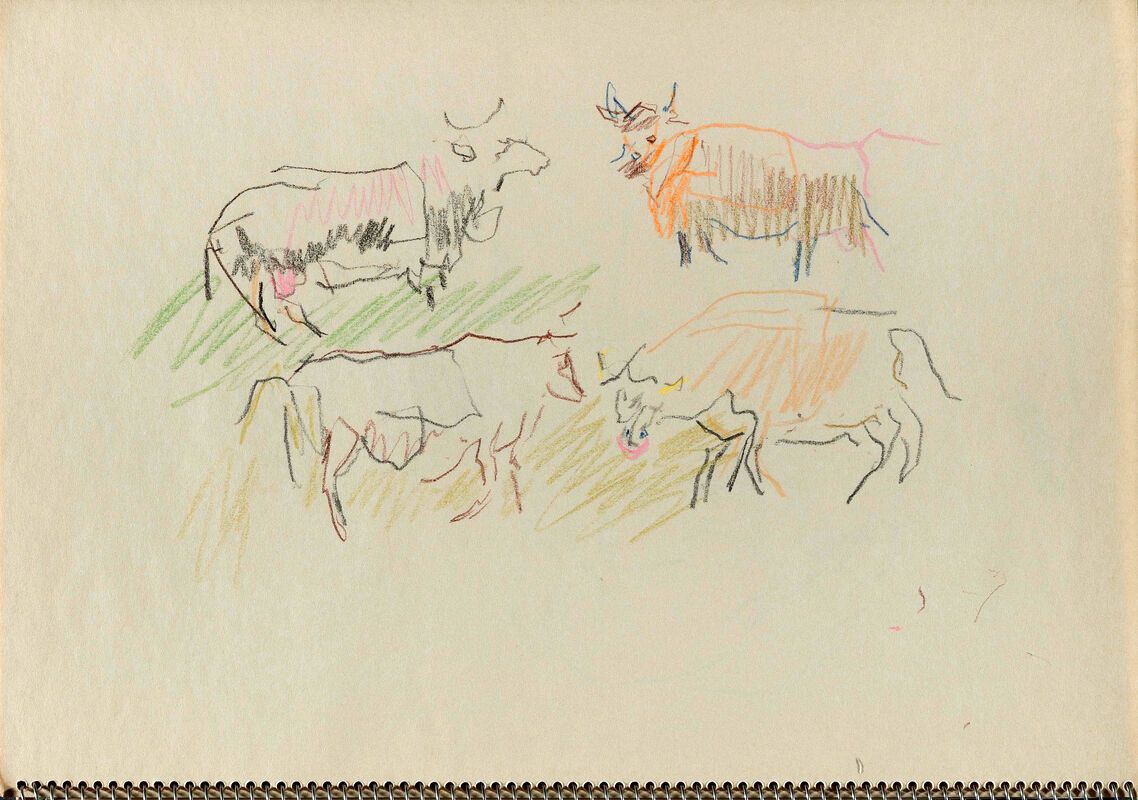 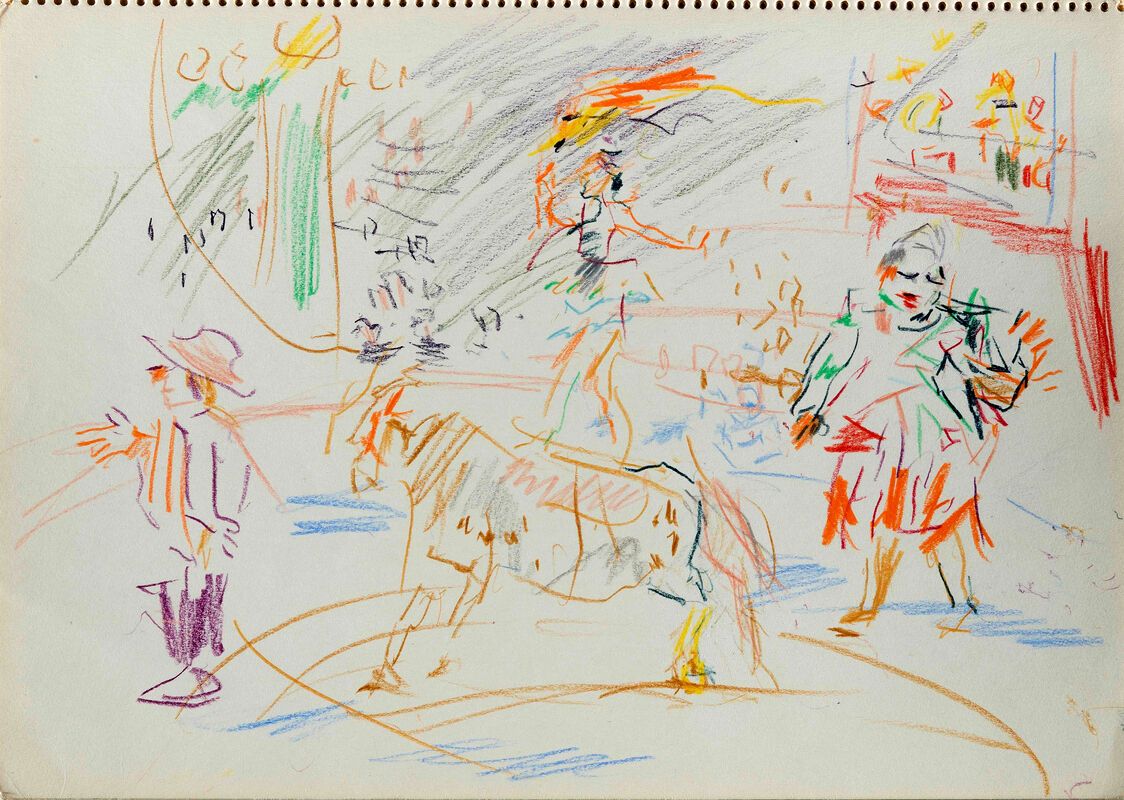